“Throughout the past 40 years, Mitsubishi has earned a reputation in this country for reliable, capable, and convenient vehicles that offer great value, winning the loyalty of many repeat customers,” said MMNA President and CEO, Mark Chaffin. “Our 40th Anniversary Special Edition Outlander and Outlander PHEV are more than just a celebration of that brand heritage, they are a powerful step forward into our next 40 years of success in the U.S.”

As the company looks forward to the next 40 years in the U.S. and beyond, momentum is already building behind MMNA with its brand-new North American headquarters opening, an all-new or significantly refreshed lineup of vehicles highlighted by the 2022 Outlander and 2023 Outlander PHEV, a robust and growing dealer partner network, and record-breaking sales success.

Mitsubishi Motors had actually been selling vehicles in the U.S. prior to 1981, but not under its own company name. Through a partnership with Chrysler Corporation, the company’s cars were sold with Dodge or Plymouth branding on them. But in 1981, the company created a formal presence for itself as Mitsubishi Motor Sales of America, headquartered in Fountain Valley, Calif., with vehicles sold through an initial dealer network of 70 facilities across the country.

In 1986, the company moved its headquarters to an all-new green-field location in the then-farming community of Cypress, Calif. The multi-acre site housed all sales, marketing, planning, and logistic operations; design, research and development, parts operations, and regional operations.

The next major move for MMNA was part of a brand-wide reinvention and saw the company relocate from Cypress, Calif. to Franklin, Tenn., just outside of Nashville, in mid-2019. In April 2020, its new-from-the-ground-up, state-of-the-art North American headquarters opened, and in spite of the pandemic, the company hired more than 150 new team members. Throughout the pandemic, MMNA has supported its new hometown through employee volunteering and corporate social responsibility, “Small Batch – Big Impact” programs. By the time of the move, the company had sold nearly 5.5 million vehicles in the U.S., through its nearly 330 dealer partners around the country.

From its inception to today’s MMNA, the company has always held close to one ideal: to design, engineer, and market vehicles that offer outstanding value and safety, leading-edge design, and pride of ownership. The past 40 years have seen vast changes in consumer preferences and tastes, and MMNA has seen both good years and slack ones. Even during the supply-chain challenges brought about by Covid-19, MMNA’s sales performance remained strong, and the company is poised for another 40 years of turning heads and driving excitement.

ABOUT MITSUBISHI MOTORS NORTH AMERICA, INC.
Through a network of approximately 330 dealer partners across the United States, Mitsubishi Motors North America, Inc. (MMNA) is responsible for the sales, marketing and customer service of Mitsubishi Motors vehicles in the U.S. In its Environmental Targets 2030, MMNA’s parent company Mitsubishi Motors Corporation has set a goal of a 40 percent reduction in the CO2 emissions of its new cars by 2030 through leveraging EVs — with PHEVs as the centerpiece — to help create a sustainable society.

MMNA has its headquarters in Franklin, Tennessee, as well as corporate operations in California, Georgia, Michigan, New Jersey, Texas and Florida. 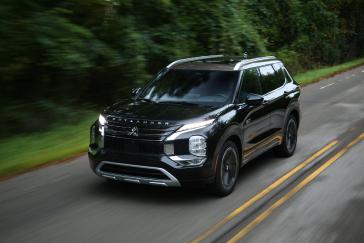