FRANKLIN, Tenn. – Mitsubishi Motors North America, Inc. (MMNA) today reported fourth quarter 2022 sales of 20,756 and annual sales of 85,810 vehicles, as sales volume continued to be limited by industry-wide supply constraints. With a concentration through the year on maximizing dealer inventory for retail deliveries, MMNA's fleet volume in Q4 represented the single-lowest percentage of total sales ever, and full-year fleet volume at its lowest ever as well.

As it has been since its spring 2022 launch, Outlander remained the company's top seller and record breaker, with 40,942 units sold through the full year, the best single year in the nameplate's history.

Meanwhile, the all-new 2023 Outlander Plug-in Hybrid Electric Vehicle (PHEV) began arriving in dealerships in late November, and MMNA's new electrified flagship charged out of the gate, setting a new all-time single-month sales record, nearly 20% above any other single month in the history of the model. PHEV sales were up 200% year-over-year in its first full month (December). While inventory levels continued ramping up, sales of the all-new Outlander PHEV were up 37.5% in the fourth quarter versus the same period a year ago.

Despite ongoing challenges from vehicle and part supply, a changing economy and hard weather across the country to close the year, there were significant bright spots, with Outlander and Eclipse Cross up 20.8% and 19.8%, respectively, over 2021 in total sales. From a retail-only perspective, Outlander notched its second-best Q4 2022 sales performance ever, behind only the previous year's best-ever performance.

As the entire auto industry is experiencing, MMNA's inventory going into the new year remains far below ideal levels, and well below natural customer demand.

ABOUT MITSUBISHI MOTORS NORTH AMERICA, INC.
Through a network of approximately 330 dealer partners across the United States, Mitsubishi Motors North America, Inc. (MMNA) is responsible for the sales, marketing and customer service of Mitsubishi Motors vehicles in the U.S. In its Environmental Targets 2030, MMNA's parent company Mitsubishi Motors Corporation has set a goal of a 40 percent reduction in the CO2 emissions of its new cars by 2030 through leveraging EVs — with PHEVs as the centerpiece — to help create a sustainable society.

MMNA has its headquarters in Franklin, Tennessee, as well as corporate operations in California, Georgia, Michigan, New Jersey, Texas, Florida and Virginia. 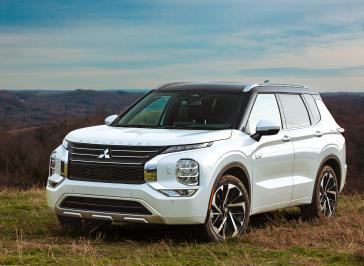