After a three-year absence, the AXCR got under way on the 21st in Buriram in the northeastern part of Thailand, where the first SS of the rally and a ceremonial start were held. Leg 1 on the 22nd to Leg 3 on the 24th included SS located in the area around Buriram. Leg 4 on the 25th saw the rally cross the border into Cambodia after finishing the SS around Buriram, while Leg 5 on the 26th ended at the spectacular ceremonial goal near Angkor Wat, the famed tourist attraction in Siem Reap, Cambodia. The first half of the rally in Thailand consisted mainly of high-speed stages on rough, dry unpaved roads, while the second half was more challenging with large, deep puddles scattered on muddy roads caused by heavy rain, and a tougher course compared to the previous five stages awaited the participants in Cambodia.

Chayapon Yotha, driving the car #105 Triton, finished fifth in SS1 on the first day. On the second day, he set the fastest time in SS2, the longest SS of this year's AXCR with a 203 km course, and climbed to the top overall position. After that, the powerful driving performance and nimble handling of the Triton helped him to finish SS3 in seventh, SS4 in sixth, SS5 in fifth, and SS6 in fifth, and he maintained the lead he had established in SS2 to take the overall win.

Rifat Sungkar in car #118 finished SS1 in sixth place following his teammate. He was aiming for higher positions, but after suffering a flat tire and subsequent damages to the chassis in SS2, he dropped to eighth position. The team's repair work allowed him to continue the rally the next day, and he finished fourth in SS3, fifth in SS4, fourth in SS5, and seventh in SS6, completing the rally in fifth overall while proving the toughness of the Triton.

Sakchai Hantrakul in car #119 tested positive for Covid-19 after SS1 and unfortunately had to retire the rally.

Hiroshi Masuoka, team director of Team Mitsubishi Ralliart, commented:
"For this year's AXCR, we built on the high reliability and durability of the Triton by tuning the engine and chassis, and entered the rally with specifications relatively close to the production car. Even so, the two Triton rally cars delivered powerful driving, and I am very proud of our high finish. The superb performance came down to the drivers, who were able to extract the Triton's performance and show us some great drives, the engineers who worked every day to fine-tune the vehicles perfectly, all the staff who provided support, and the know-how that Mitsubishi Motors has accumulated over the years. Key to it all was the tremendous support from our sponsors and the passionate messages of support we received from fans around the world. We would like to feed the knowledge we gained through our participation in the AXCR back into the development of production vehicles, and build Mitsubishi vehicles that are even tougher, more powerful, and more reliable."

Daily reports from November 21st, the first day of the rally, to the last leg on November 26th are posted on Mitsubishi Motors' AXCR special website.
https://www.mitsubishi-motors.com/en/innovation/motorsports/axcr2022/

Starting on November 21st, the Triton rally car AXCR 2022 replica is on display at the company's headquarter showroom in Tamachi, Tokyo.

About Mitsubishi Motors
Mitsubishi Motors Corporation (TSE:7211) — a member of the Alliance with Renault and Nissan —, is a global automobile company based in Tokyo, Japan, which has about 30,000 employees and a global footprint with production facilities in Japan, Thailand, Indonesia, mainland China, the Philippines, Viet Nam and Russia. Mitsubishi Motors has a competitive edge in SUVs, pickup trucks and plug-in hybrid electric vehicles, and appeals to ambitious drivers willing to challenge convention and embrace innovation. Since the production of our first vehicle more than a century ago, Mitsubishi Motors has been a leader in electrification—launched the i-MiEV –the world's first mass-produced electric vehicle in 2009, followed by the Outlander PHEV –the world's first plug-in hybrid electric SUV in 2013. The company announced a three-year business plan in July 2020 to introduce more competitive and cutting-edge models, including the Eclipse Cross (PHEV model), the all-new Outlander and the all-new Triton/L200.

For more information on Mitsubishi Motors, please visit the company's website at
https://www.mitsubishi-motors.com/en/ 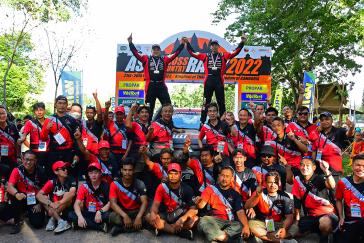