Mitsubishi Motors North America, Inc. (MMNA) announced today that its redesigned and reengineered seven-passenger crossover, the 2016 Outlander, has been named an IIHS TOP SAFETY PICK+ with the availability of Forward Collision Mitigation*. The Insurance Institute for Highway Safety is an independent non-profit scientific and educational organization that researches, performs evaluations, and assesses safety ratings in crash testing of production vehicles.

"Since its redesign in 2014, the Mitsubishi Outlander with available Forward Collision Mitigation has been an IIHS TOP SAFETY PICK+," said Don Swearingen, executive vice president, MMNA. "With over 100 improvements from the previous model year, the 2016 Outlander truly serves as an ambassador for the brand’s dedication to superior safety and reliability."

The 2016 Mitsubishi Outlander was launched in August of this year and in its first four months, sales are up 97 percent over the same four months of the prior year.  Overall, Mitsubishi Motors continues its sales momentum and has reported year-over-year sales increases for 21 consecutive months.

For more information on the Mitsubishi Outlander visit media.mitsubishimotors.com.

*Applies only to models with optional Forward Collision Mitigation 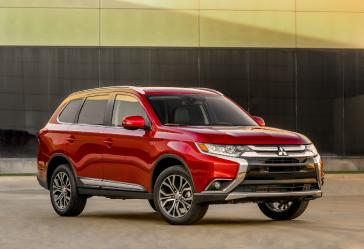