"The popular Mitsubishi Mirage G4 sedan is an efficient and value-oriented offering that has an important place in our North American lineup," said Fred Diaz, President and Chief Executive Officer, MMNA. "Despite a contracting U.S. passenger car market, Mirage sales overall were up 8.6 percent in 2018, a testament to the fact that consumers still want affordable and reliable transportation options. This award recognition by Vincentric further illustrates the strong value play that Mirage G4 offers to consumers."

Awarded by Vincentric, a provider of ownership and cost data, knowledge, and consumer insights to the automotive industry, the Vincentric Best Value in America Awards are model-specific honors that determine the vehicle with the best value in each automotive segment. The amount of value that each entrant packs is determined using a statistical analysis that incorporates the current market price and total cost of ownership of all 2019 model year vehicles.

"Our analysis showed that the 2019 Mirage G4 provides better value than all other subcompact passenger cars," said David Wurster, Vincentric President. "Key to the award-winning performance of the G4 was having the lowest total cost-of-ownership in its class, helped by its low fuel costs."

The Mitsubishi Mirage G4 is the most efficient gas-powered non-hybrid vehicle available in the U.S., featuring a 1.3-liter three-cylinder engine that achieves fantastic fuel economy of 37 mpg city/44 mpg highway. With a budget-friendly starting price of $13,795, the Mirage G4 doesn't skimp on conveniences, and includes features such as a 7.0-inch touchscreen display audio unit with Bluetooth® phone and audio streaming, a rearview backup camera, steering wheel audio controls, a center console USB port and available Apple CarPlay™ and Android Auto™, all helping to keep drivers and passengers connected and entertained.

Vincentric provides data, knowledge, and insight to the automotive industry by identifying and applying the many aspects of automotive value. Vincentric data is used by organizations including Cars.com, Mercedes-Benz, Toyota, NADA Guides, Business Fleet Magazine, Nissan, and many others as a means of providing automotive insight to their clientele. Vincentric, LLC is a privately held automotive data compilation and analysis firm headquartered in Bingham Farms, Michigan. 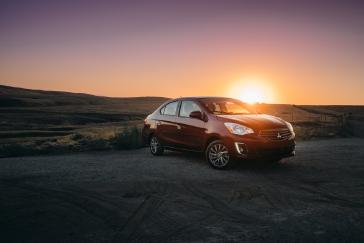