Presented for the first time at the 2019 San Antonio Auto & Truck Show, the all-new 2020 Family Green Car of the Year™ award recognizes the increasingly important role that environmental performance plays in the family vehicle arena. The winner will be named at the show during a press conference on Thursday, November 21.

The Green Car Awards™ at the San Antonio Auto & Truck Show highlight the best environmentally friendly new model year vehicles to help make purchase decisions easier. Each finalist vehicle, by virtue of its 'green' attributes and rising above its many competitors on the market, earns the magazine's recognition as a 2020 Green Car Product of Excellence™.

The Outlander PHEV is the world's best-selling plug-in hybrid SUV** and brings together the superior efficiency of an electric vehicle, the utility or a crossover as well as stability and handling provided by Mitsubishi's Super All-Wheel Control (S-AWC) system. The PHEV boasts a 22-mile all-electric driving range mated to a gas motor to combine for an EPA estimated 74 MPG-e. The S-AWC system was modified specifically for the Outlander PHEV's unique twin electric motor configuration to allow maximum performance and superior traction and safety, especially in harsh weather conditions.

For more information on the Outlander PHEV and Mitsubishi Motors, please visit media.mitsubishicars.com.

*Based on Motor Intelligence CY2017 and CY2018 Sales by Manufacturer data. Excludes premium brands.
** Based on IHS Markit New Registrations of plug in hybrid and all SUV body styles for Jan 2013 - Sept 2018 compiled from governments & other sources (where available). Captures 95% of global new vehicle volumes in more than 80 countries.

Through a network of more than 360 dealer partners across the United States, Mitsubishi Motors North America, Inc. (MMNA), is responsible for the sales, research and development, marketing and customer service of Mitsubishi Motors vehicles in the U.S. 2018 marked the brand's sixth consecutive year of sales growth.

Currently located in Cypress, California – and soon to be relocating to Franklin, Tennessee – MMNA is a part of the Renault-Nissan-Mitsubishi Alliance. Mitsubishi continues to lead the way in the development of highly efficient, affordably priced new gasoline-powered automobiles, while using its industry-leading knowledge in battery-electric vehicles to develop future EV and PHEV models. 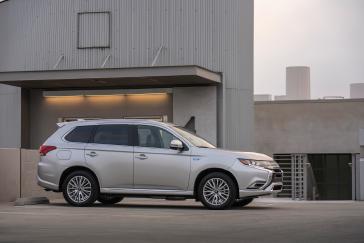 The Mitsubishi Outlander PHEV has been named as a finalist for the 2020 Family Green Car of the Year™ award by Green Car Journal.