Mitsubishi Motors North America, Inc. (MMNA) today announced the Mitsubishi Mirage has once again been recognized by IHS Automotive for having the highest Model Loyalty in the Non-Luxury Traditional Sub-Compact segment for the 2015 model year*. This is the second consecutive year Mirage has been recognized for its superior owner loyalty performance.

IHS Automotive loyalty performance is determined when a household that owns a new vehicle returns to market and purchases, or leases, another new vehicle of the same make and/or model.

"The Mitsubishi Mirage is one of the true hidden gems in the automotive industry and this IHS award validates that claim," said Don Swearingen, executive vice president, MMNA. "Mirage offers an unmatched package of segment-leading fuel economy, attractive pricing and an industry leading new vehicle and powertrain warranty. Our faithful owners understand and appreciate the Mitsubishi Mirage."

Coming off a record-breaking year where sales increased nearly 30 percent from the previous year, the Mitsubishi Mirage is new for the 2017 model year. Complete with a refreshed exterior design, improved performance and the incorporation of Apple CarPlay™ and Android Auto™, the 2017 Mirage will continue to fill a need in the market for an affordably priced vehicle for consumers to purchase.

*According to IHS Automotive's U.S. owner loyalty analysis of the Non-Luxury Traditional Sub-Compact Car Segment, Mitsubishi Mirage saw the greatest percentage of owners who returned to market and purchased or leased another Mitsubishi Mirage in the 2015 model year.

For more information on the Mitsubishi Mirage, please visit media.mitsubishicars.com. 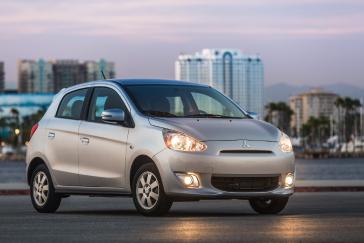