Arguably the originator of the four-door sports car genre, the Lancer Evolution is applauded worldwide for its combination of power, agility and Super All-Wheel Control. The Final Edition model features a turbocharged and intercooled DOHC 16-valve 4-cylinder 2.0L engine with 303 horsepower, making the Final Edition the most powerful mass-produced Evolution ever built. The car is available with a 5-speed transmission and special suspension tuning.

The beloved and highly revered Lancer Evolution bids farewell with its last Final Edition production model produced for the U.S. Bidding for the US1600 car, complete with a collectible numbered plaque inside, is now open on eBay. All proceeds from the auction will benefit Feeding America Riverside| San Bernardino and Second Harvest Food Bank of Orange County, both of which fall under the Feeding America umbrella.

"Mitsubishi Motors is proud to stand alongside our local Feeding America member food banks to help raise funds and awareness in support of Hunger Action Month," said Don Swearingen, executive vice president and chief operating officer, MMNA. "Not only did we want to pay homage to Lancer Evolution's historic U.S. run, but also make a difference in our local community by extending the auction's reach nationwide. So as we bid farewell to a model that has long been the pulse of Mitsubishi, we stand committed to doing our part to help drive out hunger."

"We are proud to partner once again with Mitsubishi in the drive to end hunger in Orange County," said Nicole Suydam, CEO of Second Harvest Food Bank of Orange County. "Too many people in our community are forced to make hard choices between rent and food, or medicine and food. Mitsubishi's auction of the final Lancer Evolution will make a big difference in the lives of so many men, women and children who look to us for support every day. We are very grateful for their generosity."

"On behalf of Feeding America Riverside | San Bernardino, we are truly honored Mitsubishi has chosen us as a beneficiary. Proceeds from this auction will not only help feed low income families throughout Southern California, but also help us raise awareness nationwide," said Stuart Haniff, Chief Philanthropy Officer of Feeding America Riverside | San Bernardino.

The auction is being managed by Auction Cause, a premier online auction management agency specializing in high-profile design, strategy, and cause marketing for corporations and nonprofits worldwide. For more information on the 2015 Lancer Evolution Final Edition please visit http://media.mitsubishicars.com. To bid on the US1600 Lancer Evolution Final Edition, click here.

*The winning bidder will be responsible to pay for applicable sales taxes, licensing and vehicle delivery.

About Mitsubishi Motors North America, Inc.
Mitsubishi Motors North America, Inc., (MMNA) is responsible for all research and development, marketing, and sales for Mitsubishi Motors in the United States. MMNA sells sedans and crossovers/SUVs through a network of approximately 360 dealers. MMNA is leading the way in the development of highly-efficient, affordably-priced new gasoline-powered automobiles while using its industry-leading knowledge in battery electric vehicles to develop future EV and PHEV models. For more information, visit media.mitsubishicars.com.

About eBay for Charity™
eBay for Charity is a platform that enables members of the eBay community to donate to causes in the U.S. and abroad. Sellers can donate anywhere between 10-100 percent of the proceeds and buyers can add a donation to their purchase during checkout. To date, more than $650 million dollars have been raised on eBay for Charity. 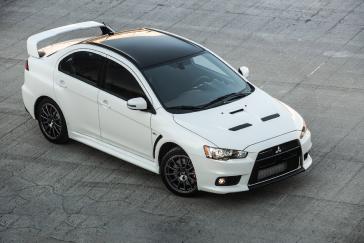