2016 Mitsubishi Outlander ranked number one on Cars.com list of most affordable 3-row crossovers

Mitsubishi Motors North America, Inc. (MMNA) today announced that the new 2016 Outlander received a first place ranking on the Cars.com list of most affordable 3-row crossovers. The 2016 Outlander, which features an unprecedented number of engineering and design improvements, appeals to buyers who want value, quality and safety with standard three rows of seating. The 2016 Outlander has a lower starting MSRP than the 2015 model, despite all of the improvements that notably increase the level of refinement and overall driving experience.

“We designed the 2016 Outlander to be an unmatched value in its segment, so it’s no surprise to us that it leads the way on the Cars.com list of most affordable 3-row crossovers,” said Don Swearingen, MMNA Executive Vice President. “From its long list of features, to available advanced safety technologies and a new eye-catching design, the seven passenger Outlander is a leader in value and reliability.”

To determine affordability, Cars.com combines the cost to purchase each CUV (including destination fee), five years of fuel costs as well as each car’s residual value after five years. To qualify for the list, a vehicle must be equipped with basic features that most car shoppers expect, including automatic transmission, power driver’s seat, rearview camera, USB port and Bluetooth connectivity.

Mitsubishi Motors North America, Inc., (MMNA) is responsible for all research & development, manufacturing, marketing, sales and financial services for Mitsubishi Motors in the United States. MMNA sells sedans and crossovers/SUVs through a network of approximately 380 dealers. MMNA is leading the way in the development of highly-efficient, affordably-priced new gasoline-powered automobiles while using its industry-leading knowledge in battery electric vehicles to develop future EV and PHEV models. For more information, contact the Mitsubishi Motors News Bureau at (888) 560-6672 or visit media.mitsubishicars.com. 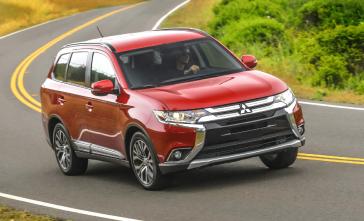